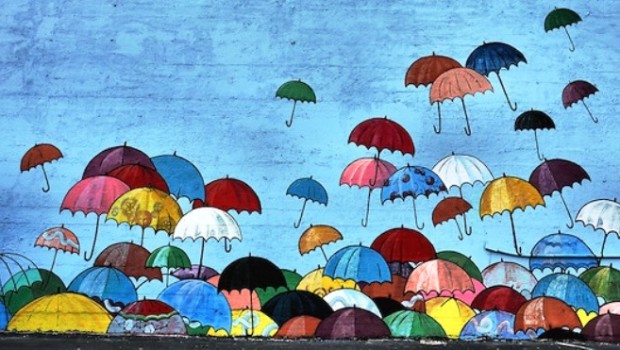 World Cup is over. Long live World Cup. I love the game. The players. The drama. How football reminded everyone that it is, indeed, a team sport despite our insta-tendencies to idolize individuals. This Cup was going to belong to the Messis, Ronaldos and Neymars; instead, it went to a bunch of bewildered Russians, stealth Croats and chaotic Belgians hopped up on all that chocolate and sheer enthusiasm of making first-timers’ history… The English with their “It’s coming home” entitlement seemed out of place in the scheme of “global is the new local” things. (Side note: so if the English can play World Cup solo, why can’t the Scots opt out of Brexit? Sort that royal mess out and then come fair-play) Oh, coming full circle, the world beheld its next football icon: Kylian Mbappé. The Cup, it giveth!

Here’s my narrative takeaway to be followed by style lessons.

Following Les Bleus triumph, much has been mulled about the “last African team” at the World Cup. I will defer to a series of excellent Washington Post op-eds (here, here and here) and comedian Trevor Noah’s viral rebuttal of the French ambassador’s claims regarding the nature of Frenchness. I want to talk about the other final team: Croatia. In  July 2018, the media suddenly remembered the brutal collapse of Yugoslavia and subsequent Balkan civil wars with their gruesome history of ethnic cleansing. It’s as if 1990s were a times prehistoric and Europe has carried on and… carried on. That massive refugee crisis was integrated into the oblivion of white imagination, until the headlines revived it for emotional kickback. Team captain Luka Modric fled his village from Serbian militia after his grandfather was executed. His Instagram sports a hashtag #TheBestThingsNeverComeEasy. Center-back Dejan Lovren fled from Bosnia to Germany where-from the family was kicked out seven years later to resettle in Croatia. “Your opinion of me doesn’t define who I am” reads his Instagram account byline. The wartime kids done good. Two more World Cup players survived Yugoslavian fallout by seeking asylum in Switzerland and now playing for that forever-neutral flag: Xherdan Shaqiri and Granit Xhaka. What makes the world go round? Migration!

IT GETS (MORE) COMPLEX

“I am German when we win, but I am an immigrant when we lose.” The 2014 World Cup champion Mesut Ozil thus summed up reasons for leaving the national team last week. Following a dispiriting exit from the playoffs, the Gelsenkirchen-born midfielder came under racist ire after a photo-op with Racep Tayyip Erdogan, the president of Turkey. In case you’ve been living under a rock (or in USA), there is a lot ‘o wrong going on in Turkey under Erdogan’s newly extended rule. Images of Ozil, a beloved sports figure in his ancestral homeland, were used for blatant political propaganda. How to denounce racism against Ozil without endorsing his pro-Erdogan stance? Damn his disarmingly cute smile! Erotic, ethnic, political, religious, economic and other interests roll into a tight ball soaring for the existential net… Oh what to-do to die today. The very premise of the World Cup will continue to flounder as individual alliances increasingly span more and more territories over a lifetime. By the age of 40, having been born in a nation that no longer exists, I’ve lived, loved and lost in 5 countries. My personal trajectory is by no means exceptional. Where’s our (freak) flag?! 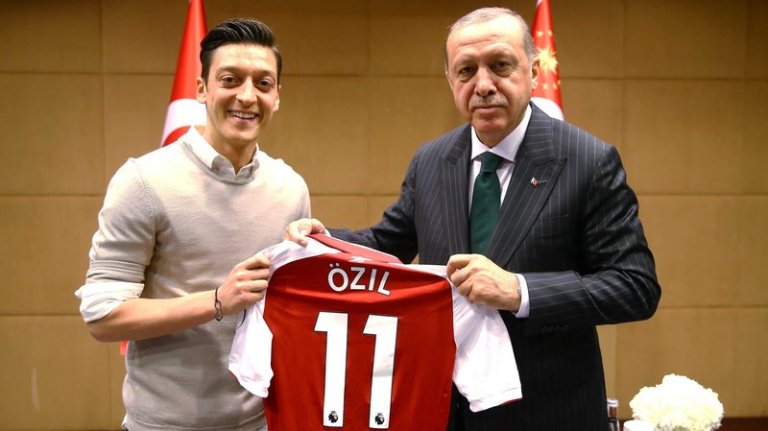 In matters of style and diplomacy, optics is everything. Cue the final Moscow downpour and that -ella -ella -ella moment of telling geopolitical faux pas. Russian president Vladimir Putin was immediately sheltered by a security umbrella while his French and Croatian counterparts along with the players endured the baptismal catharsis in open air. Cue the memes. That’s peak white male privilege times colonial (and nuclear) power. However, it made for a finale unrivaled in authenticity: the drenched hugging, Mother and Father figures pressing sons-of-nations to their chests (with uncle Vlad looking on), tears of mixed emotions, the boys sliding across puddles of soaked confetti like x-year-olds they are, the bittersweet joy and humbling pride, “the unbearable lightness of being”. The why we love football. This World Cup delivered everything. 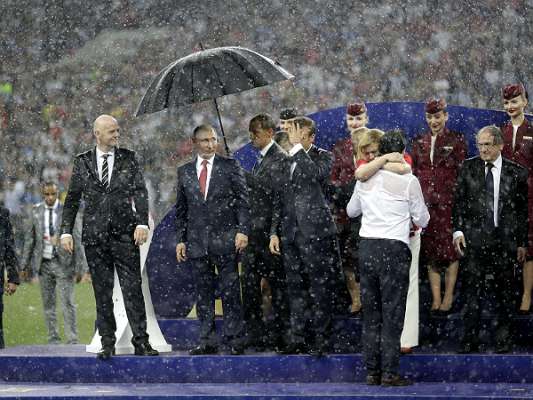 This bright moment did succeed to veil, thinly and briefly, Croatian president Kolinda Grabar-Kitarovic courting ultra-nationalist policies and running on an anti-migration platform. Well, isn’t that ironic, don’t you think (see above). And Emmanuel Macron… I’ve already spoken enough about Macron and his refugee bingo. Meanwhile, Putin needs no introductions (even, and especially, if you live in USA). So there is was, the 2018 World seen through the football lens. Europe’s colonialist past reshaping Europe’s postcolonial future. One goal at a time. One goal at a time.

I imagined my six degrees of separation with most World Cup history-makers would require leaps of faith. Reality proved to be more efficient. Alumni of the Academy of Art University, where I have the privilege of teaching fashion journalism, contributed to the Coca Cola campaign for the Icelandic national team! Thorvaldur Sveinsson and Jon Eldon worked on the promo website for the beautiful Saman video that uses the rhythm of the team’s famous chant to pace the editing. Earlier, I was moved by the Icelandic fans’ rendition of a Russian folk song Kalinka that went viral as a thank you to the World Cup hosts. Small World. Let’s keep it that way! …and Iceland, can’t wait to meet you someday!

2 thoughts on “(Russian-African) World Cup: Many Refugees, One Umbrella”