#RefugeesWelcome. YES! Then what? Now what? Who. Where. When. How. As a white European male member of the inter-national creative industry, I turn to my people and colleagues for answers, insights, calls to action, emotional processing. For all the efforts and intentions, many of which are laudable and some of which will be noted here, White Imagination is simultaneously fueling and failing the refugee crisis. Let me take you through where I’m coming from. This is an initial three-part inquiry.

The News. Aquarius,a ship carrying 629 African rescuees, is refused entry by the governments of Italy & Malta and becomes a symbol of European asylum debacle. United Nations and the government of Myanmar announce a resettlement deal for 700,000+ Rohingya refugees, but “no one knows what’s in it“. United States quits UN Human Rights Council as it opens detention camps for 2000+ migrant children separated by force from parents amid reports that last year the US government had “lost track” of 1500+ unaccompanied migrant minors. The state of Israel continues its daily genocide of the Palestinian people, undeterred. Refresh your newsfeed for more.

The Discourse. In 2018, any refugee discourse must be linked to post-colonial work on racial justice. Refugee-dom is racialized due to its predominantly global south vs. global north dynamics. White Imagination has framed literally any space it willfully occupies as benevolent and any space outside its explicitly exercised control as basically inhuman. Pre-human, semi-human, one-drop human. To quote President Donald Trump, himself a pinnacle of White American Imagination, sh*t hole countries send their illegalsto infest our country! He is not out of line; he speaks from within the canon shaped by generations over centuries. Here’s a simplistic anonymous exercise. Synonyms to refugee include escapee, fugitive, runaway, exile, émigré, stateless person, outcast, etc. When you envision an escapee or an outcast, who do you see? Now, imagine an émigré or an expat… You don’t have to buy into my suggestive wordplay or your own hypothetically preconditioned biases, ask Google! Image-search “refugee” and scroll and scroll and scroll through the pages of desperate faces and places until white folks begin to appear in city squares with “refugees are human beings just like us” signs. Welcome on board, white people! Sincerely so. I explore White Imagination on the refugee crisis because that’s where its historic roots are at and because this is how white people will have to deal with our sh*t regarding it. Oh, that and #ColonialDebt.

The Arts to the Rescue! Click, click. Hola from Valencia, Spain. I am at the World Press Photo exhibition of the best documentary images from the previous year. Many are instantly recognizable like Usain Bolt’s epic finish line smile or the turtle swimming trapped in plastic. However, majority of visual space is dedicated to the struggles of people (of color) around the world: armed conflicts, economic and environmental displacement, human rights abuses. It is crucial to bear witness, to honor the plight, to lift the stories demanding and deserving of representation. I also ponder a certain (not a) standalone fact: majority of these award winning photographers are white males… Sure, this particular lens evolves as evidenced by the seismic National Geographic apology for its historically editorialized racism. Still, I think about it. Who is driving these narratives? Presented in 100+ cities, World Press Photo reaches a “global” audience of over four million people each year. I put quotation marks around global as the exhibition map shows an overwhelmingly European agenda.

Valery Melnikov on war in Ukraine

Sergey Ponomarev on war in Iraq 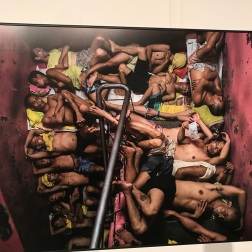 I have two art books on the refugee experience which I’d like us to also take a look at.

Loss of Center: From Here to There

“From Here to There: Drawings by Refugees in Belgium“. This volume of drawings made by refugees in 2016 was a collaboration between S.M.A.K., a contemporary art museum in Ghent, and several refugee sites throughout the country. The project had provided space for first-person accounts and for local communities to interact. The archival record of it is no less haunting in its simplicity than the graphic World Press Photo images . As far as thoughtful institutional responses go, this was a go for me. 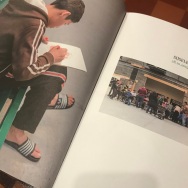 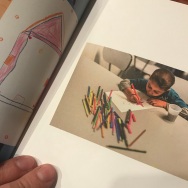 Belgium was no bystander in the colonial nightmare. King Leopold II is responsible for millions of gruesome deaths in the Congo basin. However, White Imagination appears to have let him off the Hitler hook. How come the name Leo is t-t-trending on Baby Center while the Adolf entry contains “no data”. What gives?! Was it the chocolate?! I digress. If you’re wondering if the book represented a one-off or part of a long-term commitment, you’re my kind of wonder-full! S.M.A.K. has a history of pioneering programs that challenge the notion of a museum as a bastion and arbiter of culture. Last summer, Swiss artist Christoph Büchel’s immersive installation “Verlust der Mitte (Loss of Center)” turned the museum into a refugee camp, literally. It housed a group of refugees (in a private section off-limits to museum visitors) as well as re-purposed public exhibition spaces as storage facilities. “Designed to make you feel uneasy“, it was labeled “the most radical exhibition in the world”. You should read the Metropolis M extensive review. In the past two years, Belgium has been granting asylum to record numbers of refugees. I welcome sustainable relational efforts by cultural institutions and look forward to learning more about this ongoing work at S.M.A.K.

[Disclosure: in March 2017, I had been a media guest of S.M.A.K. at the Kathmandu Triennale which also addressed migration within the Nepalese and diasporic contexts. This independent post is not part of prior coverage].

The Search for Atlantis via Rome

Atlantis was produced by a group of mostly Italian illustrators as a crowdfunding effort  to support MOAS: Migrant Offshore Aid Station. It conducted search and rescue missions (SAR) in the Mediterranean, but has since shifted its operations to the Andaman Sea off the coast of Bangladesh due to the aggressive stance of the Italian politicians who have accused SAR initiatives of abetting human trafficking. Each artist depicted their take on the theme for Atlantis, the lost continent. That’s Italians stepping up when the Italian government lets them down. The project had raised over 4,000 euros for the organization and I proudly counted myself as one of its 111 supporters. I wish to see more solidarity gestures from the creative community at large. That said… Seen alongside the previous book, this collection of images reveals a certain romanticized idealization of the refugee experience, particular to the abstracting anesthetics of White Imagination on the subject. I wholeheartedly salute the participating artists and maintain my critique our collective oeuvre.

Atlantis in My Hands 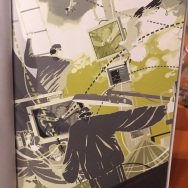 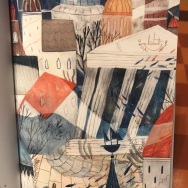 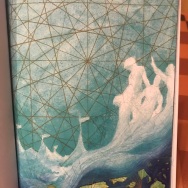 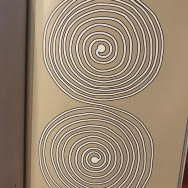 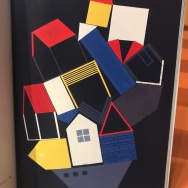 My exploration of White Imagination at work on the subject of refugee crisis is driven by a desire to articulate and manifest my creative responses and my responsibility therein.  Please, feel free to reach out to me with your experiences and suggestions. In the second installment of the three-part series, I’m going to talk specifically about the White French Imagination and… MUSIC! Who doesn’t love music?!

Find a refugee-focused local organization in your area and get involved!