Another TOM* confession… Prepping for the fall-winter shows, I looked at the previous work of Rani Kim and was ready to come out with a line “declarative attempts at reinventing menswear often feel like walking into a wall” in reference to a particularly striking image from the designer’s earlier campaign/editorial (see below). I now stand corrected. While the utopian pursuit itself remains an elusive endeavor, RANK BY RANI avoids pitfalls and dead-ends by contributing to the collective discourse on the social roles of contemporary garments in, perhaps, the most fashion-forward inquisitive collection of the week.

This is clothing for the couture code breakers. In a few seasons, the global trendsetters might be wearing some-thing that emerges within the space of collections such as this. Why/how do we wear what we wear? What/who do we put on clothes for? What could/should we be asking of fabrics, shapes, textures and colors? Where are the limits and boundaries of visual forms and functional modalities? RANK BY RANI explores similar conceptual territories as London’s breakthrough duo Agi Mdumulla and Sam Cotton (whose FW15 collection I reviewed for Depesha) or Thom Browne who has been holding up a funhouse mirror to American masculinity or a prolific diaspora of Japanese visionaries. In a topsy-turvy world of fashion, the avant-garde at times appears to be the most reasonable thing to put on.

P.S. For the sake of reference, here is the aforementioned image. For more, check out full NEW 50s editorial. 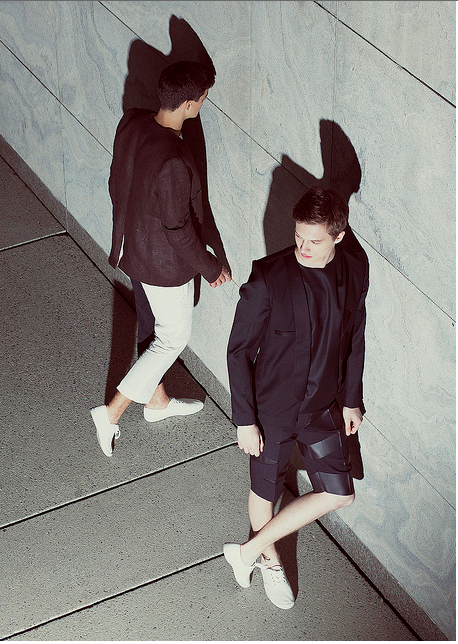