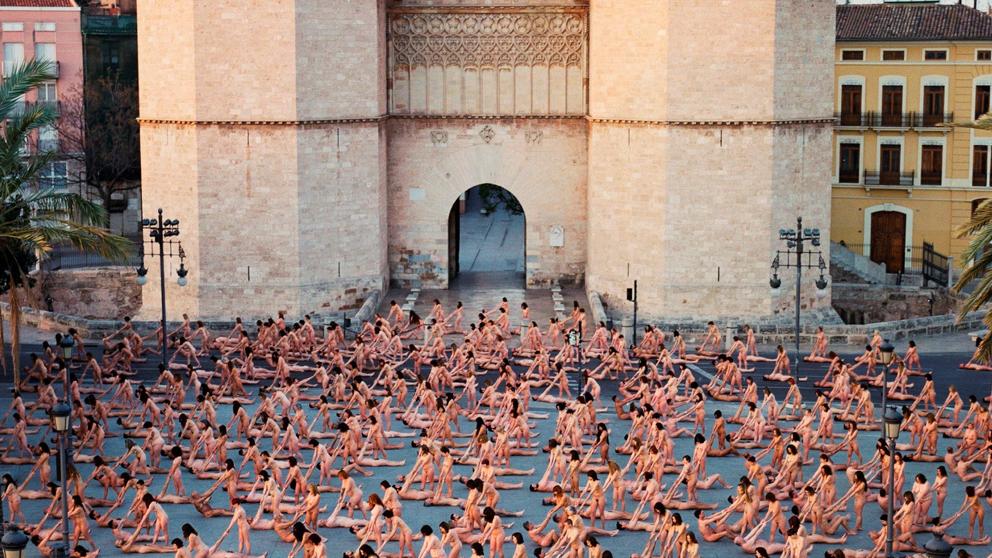 What a difference a year makes… It’s March 30, 2020 & we’ve been in coronaviral state of alarm in Spain for over two weeks. The city has become off limits to its residents. On March 30, 2019 I was NAKED in the heart of Valencia. Bucket List?!

I’ve followed Spencer Tunick and his “controversial” work since the photographer began staging large-scale nude interventions in public spaces around USA. In fact, I worked as a production assistant on his epic shoot in Grand Central Station in NYC in 2003. [Shout out to my Custom Family!] It was connected to the HBO release of Naked World. New York Public Library and Museum of Natural History declined to host the event. It was an incredible experience to witness & a logistical clusterfuck to pull off. All participants and staff received a signed print. I treasured it for years.

Fast forward sweet-sixteen years. Living in Spain now, coming to terms with my own sense of purpose, place & mid-life agency, it was cathartic to finally volunteer for Spencer Tunick. Commissioned by Intramurs Festival in Valencia, the installation took place around the iconic city gates Torres de Serrano at dawn. Spread on bone-cold pavement, I had come full circle to myself among the disrobed, disarmed humanity. I got another signed print. When I grow up & can afford it, I’ll frame these nicely together. Double the OMG!

While finding oneself/someone in Spencer Tunick’s images is a fun party game, I leave you with a subtitled news report and behind-the-scenes action. My absolute hope is that we can get intimate with our cities as soon as possible. I miss that pavement.

Where is Timbul?! LOL … & here you can read a detailed account of another participant.

One thought on “Naked With You: Spencer Tunick”