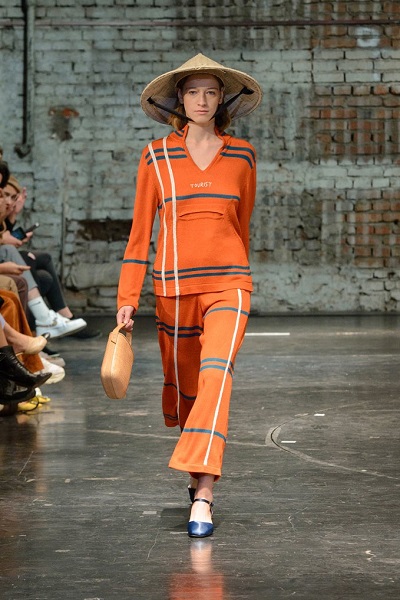 Two white girls (designers) went to Vietnam (in theory) and were inspired to create an East-meets-West (stereo)type of a collection. With 90’s Americana thrown in. I put down the press release and fastened my front row seat belt. This was not going to end well. Here is how Luisa Orsini and Antonine Peduzzi of TL-180 proved me wrong at Mercedes Benz Fashion Week Tbilisi in Georgia … [after the images]

Cultural appropriation is a plague. Just google “Jenner cultural appropriation” and click on any of “about 327,000 results (0.65 seconds)” to get the gist of it. However, it turns out … you can create silhouettes and tailor garments to make influences readable without straight up dressing (white) people in quasi-national costumes; you can create allusive prints that honor Far Eastern artistic heritage without a single dragon in sight; and you can even braid white women’s hair in ways indigenous to their pan-European roots (!); in other words, you can be affected by a culture without getting consumerist about it.

Here is why I think inclusion of traditional straw cone hats worked. And do correct me if I’m off. 1) Because the rest of the collection and the styling did not appear appropriative. If I’d seen a single dragon, I’d breathe fire myself. As an accessory, one is likely to wear it … while there. 2) The subtle “tourist” lettering on the front of otherwise fairly office-able knitwear was a … we get it, none of these people are trying Vietnamese cultural identity on for size. It’s mementos. 3) It’s four hats punctuating twenty-eight looks; it seems a proper Parisian maison would’ve gone 28/28 to obliterate the point. (Sarcasm) Would the collection hold up without the cone hats? Yes.

I’m excited to watch where Orsini and Peduzzi steer their collaboration. I’m still on the fence about their love for matte silks and menswear as an afterthought. However, as far as emergent international brands go, TL-180 makes my fingers-crossed #wishlist!