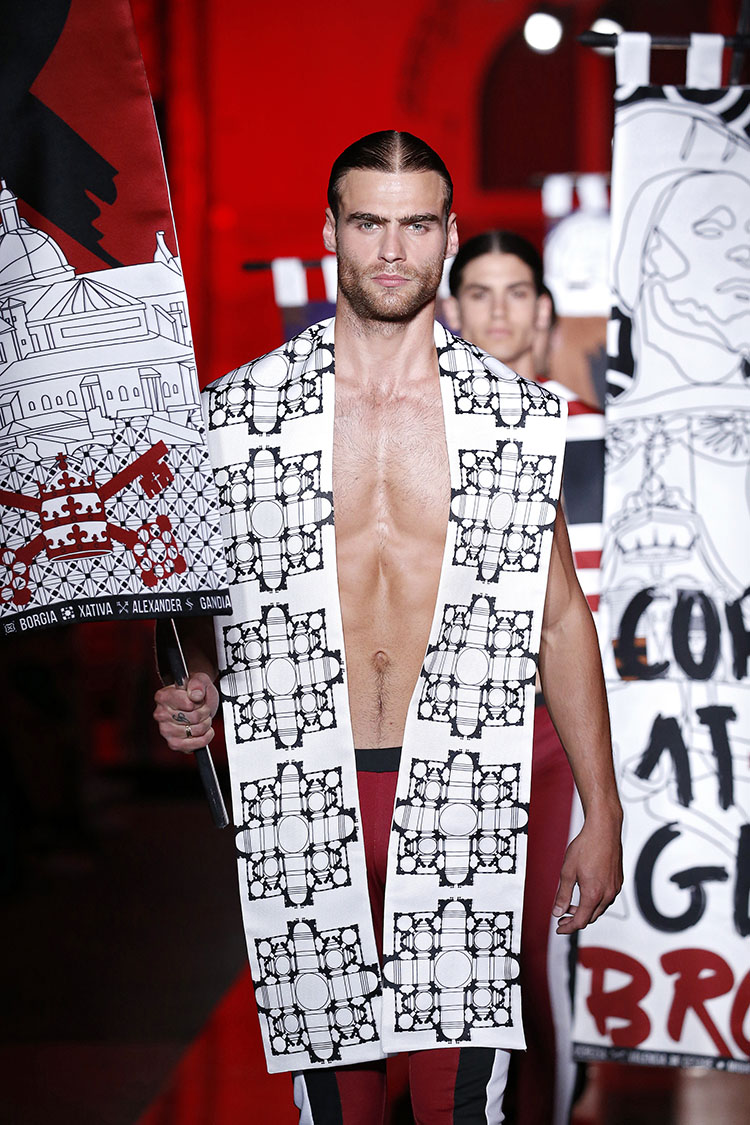 “Either a Caesar or Nothing.” This was the one show I looked forward to at Barcelona 080 Fashion Week. Miquel Suay taking on the House of Borgia motto as a Xàtiva native himself… the immense heritage of Christendom’s most powerful family in the hands of my f*cking favorite designer? Breath, held. The banners. The stoles. The gloss. I saw where this was going and I didn’t like where it arrived. The collection was called Courage and that’s what it lacked. I still love him; we just need to talk… [My points, below]

Sure, there was plenty herein to buoy my admiration of Suay’s talent. His command of tailoring and color-blocking is painstakingly skilled. Those sharp-rounded shoulders, the belt-less waists, the terracotta swatches against infinite blue with goldthread stars scattered throughout. This collection is romantic AF. He makes clothes that make me want to be forever young – at heart – to wear. Yet, my objection to getting cute with the colonial aesthetics of Christianization is on record (see, Nuno Gama). The actual Borgias were marauders and murderers of stature so epic The Godfather, and entire Mafiosi phenomenon, is based on them. Does patronage of the arts balance the historical justice scales? The Borgias was once a Showtime series starring Jeremy Irons (because a Hollywood take on anything Mediterranean naturally calls for a white Brit, i.e. still bewildered by Robert Twilight Pattinson as Salvador Dali in “Little Ashes”). But back to the source material … I walk by the imposing façade of the Borgias Palace in Valencia nearly every day. Here is a fun fact. The original block-long building was only a few meters wide. In other words: Borgias, they been frontin’… They took the gospel of fake-it-till-you-make-it all the way to the infallibility of a papacy.

A curious thing about Miquel Suay is that as a menswear designer he possesses a vision and craftsmanship that need no bells or whistles. The decision to copy-paste reproductions of Renaissance greatest hits onto garments belittled the wonderfulness of both. A pocket Mona Lisa?! Superb white jackets marred by souvenir prints on the back. (If) stripped of lazy gift shop antics, the smartly styled clothes were a bold homage to the fraught legacy of the Borgias and the land that had nursed them to infamy. As a descendent of Valencian cultural lineage, Suay should have more faith… or better yet, Courage, to keep charting his own course.