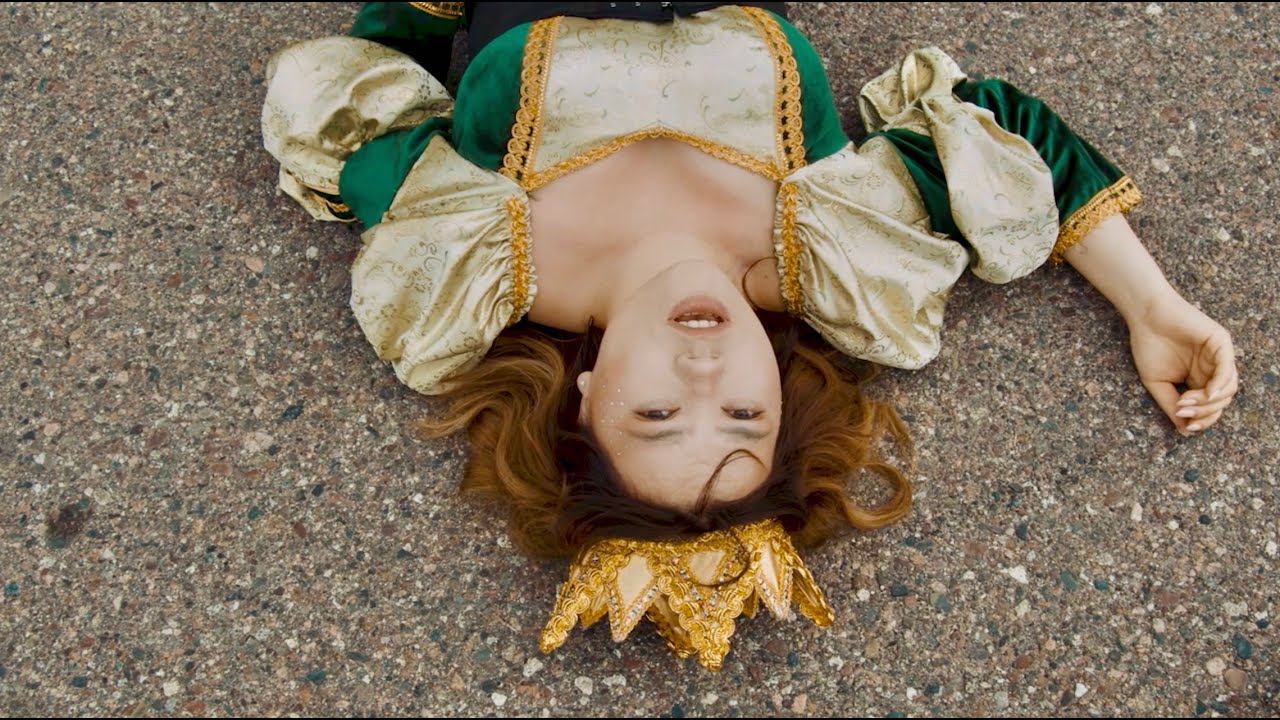 It could have been (from) anywhere. A steady indie pulse, runaways who happen to be royalty or deities in disguise, deserted highways to/from nowhere. After the July edition of Style-the-Beat, my fashion journalism students at the Academy of Art University were wondering if Drama Queens was produced in Australia, Arizona, Turkey? Turns out, the uncommon denominator is Kyrgyzstan: a beautiful Central Asian nation and a stellar Scrabble move!

“This gave me some of the best feel-good/fuck-off vibes of 2021. Costumes and styling blur the line between Disney cosplay, Burning Man antics, and Sex & the City Hamptons getaway… set against stunning vistas of Kyrgyzstan.”

I asked stylist Zaman Tursunbekov for all the behind-the-scenes drama 🙂 “Oh, they call us drama queens? Alright! So let it be. Just share your drama!” Re-watch the video and get to know Zaman.

How did the visual storytelling come together for Drama Queens?

Zere herself and the director Alina Koshmatova came up with an interesting script. At the first meeting, we discussed it in detail. I really liked all the ideas and immediately began to think about how to make this work technically. The most important image was the long white capes. Originally, they had to cover the nose and be floor-length so that at the moment of spinning they would create a circle visible from above. Most fabrics are fairly heavy-weight at that volume, so the attachment above the nose proved impossible. Even from the neck, the capes still had to span out into perfect circles. They had to be non-crease since we’d have no way to iron them outdoor. They also had to be agile to allow for certain dance moves. After much deliberation, I decided to add plastic plumbing tubes to the capes. It was very difficult to figure out but at the first rehearsal everyone fell in love with the capes. They worked perfectly. And it had to be a total white look, so we got different white t-shirts and white pants from second-hand stores.

How did you walk the line between homage and parody using “Disney” costumes?

Zere’s idea was to convey the mood of a Drama Queen. The singer’s corset was a reference to medieval, archaic standards of beauty for women. The song wanted to talk about freedom(s). So, there was no intent to parody “Disney” as such. All these costumes were rented from the same studio and styled on set. For the “modern” part by the lake the initial idea was to use something like ancient or vintage pajamas. We could not find them on short notice, so the performers pulled from their own wardrobes “something light.”

Where did y’all shoot the stunning outdoors parts?

The open road was near the town of Balykchy, the “astral” sand pit near the town of Kant and a road towards the mountains near Bishkek. It was scorching hot and windy. I felt great respect for the performers who had to do hair, make-up and move in these costumes all day. I also did hairstyling for this project – outside, in the heat, in the wind – it was a good professional challenge 😅 Everyone on this shoot had a great tan by the end!

What is the difference between styling for a music video, an editorial or a red-carpet event?

Each project is unique in its own way. When working on videos or editorials, you don’t have to worry as much about the created looks. The main thing is to capture one successful angle, one interesting frame to get someone’s attention. It is not like that on the red carpet. Everything should be perfect there. There is no “again!” there. For example, in Drama Queens we created a desired effect through the screen. However, such cheap fabric would not be suitable for a dress for a live event, at all. It all depends on the client and many other factors.

Which wow-now stylists you follow online for peer education and inspiration?

We have a lot of talented designers in Kyrgyzstan. Some are well-known beyond our borders and deserve the attention they’ve received: Dilbar Ashimbaeva @dilbarofficial.kg, Zhumagul Sarieva @chapansar or Galina Boykova @gbconcept. However, I also invite everyone to discover Dina Ratsko @dinaratsko, Sherden @sherden.kg, a label by design duo Ijan Firsova and Saikal Seitalieva @cutadash_official, as well as Altai Osmo @altaiosmo.

Do you remember which music video made you fall in love with fashion styling?

I was very impressed when I first saw Rihanna’s Umbrella video in 2009. I was a schoolboy living in a village and the DVDs were just coming out. In a way, I experienced the so-called “culture shock”. I still remember it vividly: a short black leather jumpsuit with a deep neckline, gloves and a hat, a spectacular smoky-eye makeup. And her hair was just perfect. After the video, everyone wanted to try Rihanna’s bob. Ever since, I’ve adored her style. A real icon! Lately, I liked a few new videos. For example, Alewya’s Spirit_X and how she experiments with amazing accessories. Also, check out Max Barskih and Zivert duet Bestseller, a very bold and fascinating take on futurism.

What is your advice to aspiring stylists, especially those operating outside the Paris/Hollywood orbit?

In fact, I consider myself an aspiring stylist! Based on my experience so far, I advise all creators to be bolder in their ideas, to not limit their imagination, to stay on top of latest fashion news and the history of trends and – most importantly – develop a habit as an observer. The more you look around, the more you watch the world, the better you train your sense of style and your skills. The key is to keep moving forward.